The average true range or ATR is a measure of the recent volatility based on the absolute range of the price during each period.  It is a very useful indicator to measure how far a price may move in either direction. The ATR is commonly used by traders and investors to calculate both stop-loss and profit targets.

To see an example of how to calculate the ATR in an excel spreadsheet see the video article Use Excel to Backtest a Trading Strategy using an ATR Stop-loss.

Brent Crude Oil is a grade of oil traded on the Liffe exchange in London.  It is widely used as a benchmark for oil traded around the world.

The commodity dollars are the Australian, New Zealand and Canadian dollars.  These three countries have advanced economies and freely traded currencies.  All three economies also have large resource sectors that stand to benefit when commodity prices rise and lose-out when commodity prices fall.  The Australian dollar is historically linked with the gold price, the New Zealand dollar is linked with agricultural prices and the Canadian dollar (particularly in recent years) is linked with the price of oil.

Historical data enables us to backtest to see how a trading strategy would have worked in the past.  Backtesting is a very important part of developing and improving trading strategies.  However, if we over optimise our backtests we end up with trading strategies that are highly profitable for a particular time series but not very useful for live trading.  To avoid curve fitting it is good practice to test trading strategies on out of sample data.

Dojis are a popular type of candlestick pattern that are used to identify market turning points. Dojis are identified by their small body (see image below). 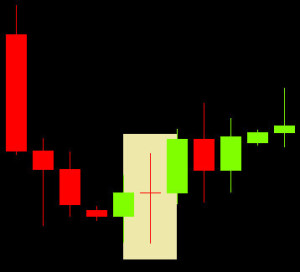 Dojis can be traded as reversal indicators based on the preceding trend and using support and resistance levels.

Fibonacci retracements are a method of predicting when the price may stop and reverse. They use the Fibonacci sequence which is each number is the sum of the two preceding numbers: 0,1,1,2,3,5,8,13…

Traders use these numbers to help guide entries and exits and to help quantify how significant a retracement is.  The following examples are all based on the EUR/USD pair, however Fibonacci retracements can be seen across all markets and timeframes.  The most popular retracement levels are 38.2%, 50% and 61.8%.  50% is not a Fibonacci level but it is significant number and is usually treated in the same way.

Fibonacci retracements are not guaranteed and the market will often go straight through these numbers.  However, they are a useful way of making sense of a retracement and helping to predict how far the price will move in a particular direction.

The above chart shows a 38.2% retracement on the daily chart.  The price is clearly in a downtrend, however within the trend there is a minor upwards retracement to the 38.2% line before the price continues down.

The above chart show a 61.8% retracement on the 1-hour chart.

The above chart shows how the 50% retracement level provided support on the weekly chart.  This chart is slightly different because the price penetrated 50-60 pips through the level but did not manage to close below.  The price was stuck for four weeks at this level before moving higher to make new highs.

For further information about fibonacci retracements see the blog post: How to Calculate and use Fibonacci Retracements in Forex Trading

The most basic technical indicator is the moving average (MA).  MAs provide an average of the most recent prices.  The most popular types of MA are the simple moving average (SMA) and the exponential moving average (EMA).  An MA is usually calculated by taking the closing price.  However, it can also be calculated using the high, low, or average prices.

An SMA is calculated by taking the mean average of a set number of periods.  The SMA is particularly useful because the trader can instantly tell whether the current price is high or low compared to the recent average price.  A very simple way of deciding whether a market is in an uptrend or a downtrend is to see whether it is above or below the 200 period SMA.

An EMA is calculated by using an exponential factor to give more weight to the most recent data.  The EMA is therefore more responsive and tends to track price action more closely.  The slope of the EMA is a useful way to detect the market trend.

Each month the NIESR (National Institute of Economic and Social Research) produces an estimate of UK GDP growth over the previous quarter.  The estimate has proved to be a reliable guide to the official GDP figures.  The NIESR data is available about a week after the PMI data and 2-3 weeks before the first official estimate of GDP.

The Parabolic SAR is a technical indicator that identifies trends and provides possible entry and exit points.

PMI (Purchasing Managers’ Index) data is published monthly by Markit, ISM and other regional groups and is one of the earliest measures of real economic activity, as opposed to sentiment.  The PMI data is available for many countries, regions and sectors of the economy.  The PMI data is released in the form of an index where above 50 represents expansion and below 50 represents contraction.  The importance of the PMI data, not just to traders, but also to policy makers can be seen in the fact that the Bank of England, regularly sites PMI data to justify their interest rate decisions.  See this Monetary Policy Committee Minutes for the references to European PMIs and the ISM data.

Price channel are useful guides to trending markets.  Channels can be drawn in different ways but one of the easiest method is to use a standard deviation channel.  The price channel consists of a central linear regression line and two outer lines, normally set one standard deviation from the central line.  These channels are calculated automatically by most charting software.

The NZD/USD daily chart above shows a very neat upward trend contained almost entirely within the price channel.  Once this channel has been identified it provides good opportunities to buy and sell.  The channel also gives a guide to when to exit a position.

Quantitative easing or QE is when central banks buy assets (such as government bonds) for the purpose of increasing the money supply.  It is often referred to as “money printing” because the central bank will create new money electronically to buy the assets.

The idea of QE is to reduce interest rates and maintain enough money in the economy to avoid deflation.  Another factor in QE is that by reducing government bond interest rates, investors are encouraged to put money to be placed into more risky assets such as equities and corporate bonds.

In the above 4-hour chart the EUR/USD shows respect for a series of support and resistance zones. The pair tried to get above the 1.3274 resistance level on four occasions in December.  Once it got above in January, the 1.3274 level acted as support.

Markets are continually making new swing lows and swing highs.  These points are significant and can tell us whether the market is trending or range-bound.  Swing lows and highs tend to attract buyers and sellers and will often act as support and resistance.

The above chart shows a nice uptrend making a succession of higher swing highs and lower swing lows.  While the market continues to make these new highs it is normally best to trade this market to the long side.

The above chart is showing a downward trending market making a succession of lower swing highs and swing lows.  While it continues to make these lower highs and lows it is normally best to trade the market on the short side.

A trendline is used to confirm the existence of a trend and can be ascending or descending.  The more times the price touches and then bounces from the trendline the better – a minimum of three bounces is good.  Trendlines can occur on any timeframe.

An ascending trendline is a line drawn underneath a upward moving price connecting a series of lows.

WTI, also known as Light Sweet Crude or Texas Light Sweet, is a grade of crude oil traded on the New York Mercantile Exchange. WTI is a very widely used benchmark that is often just referred to as crude oil.

Every week the Economic Cycle Research Institute (ECRI) update the WLI to reflect developments in the US economy.  ECRI claim that the WLI has a moderate lead over the real economy and can be used to help predict turning points in the economy.

The ZEW Index of Economic Sentiment is a widely followed indicator that has tended to predict changes in economic growth 3-6 months ahead.

Powered By MemberPress WooCommerce Plus Integration